An important milestone was reached in 1975 when Faith For Today produced its first hour-long dramatic film, John Hus. Inspired by its success, Faith For Today ventured into “TV drama specials” with The Harvest in 1979. This one-hour film about the healing of a stress-torn family won an Angel award for “the highest production and artistic excellence” in February, 1980.

Happy Holidays from Faith For Today 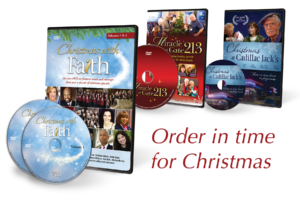