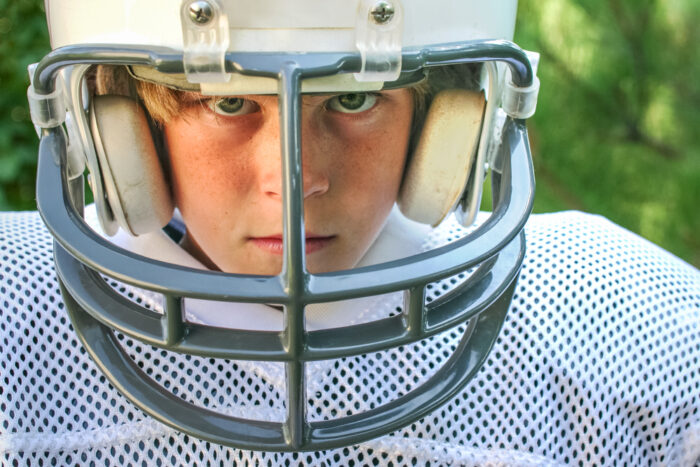 I don’t know what his real name was, but our head coach told us to call him Coach Beef. He was our assistant coach. I was in the eighth grade, and I was playing football.

I’ll never forget Coach Beef for two reasons. He was one of the toughest men that I’ve ever met, and he gave one of the most memorable speeches before the most grueling game I ever played.

Every day in practice, one by one, he would go down the line, wrap his meaty fingers around a player’s face mask and yell in their face, “I’m looking for somebody who wants to hit somebody! Are you gonna’ hit somebody?”

To which you were supposed to respond, “I’m lookin’ to hit somebody. I’m looking for somebody to hit!”

Then he would ram his head into yours and shout, “Good!”

When he did this, it felt like someone just slammed your head with a butane tank. I always had a headache after this interchange. The amazing thing is that Coach Beef was using his bare head and doing this over and over as he went down the line of about twenty guys. It was rumored that he had a metal plate in his head—probably from some action he saw in Nam—but we guessed that this was just a rumor.

Mid-season we had to face one of our archrivals, University Junior High School.

University Junior High had one of the most unstoppable players ever. Sean Sunday was his name. You know how things are in eighth grade. Some guys have explosive growth…and then there were the rest of us.

I remember the nervous energy that distracted all of us as we looked across the field and watched their team warm up. We were paralyzed by the fear that was ricocheting inside our helmets. We couldn’t stop staring at him. Sean Sunday. Part beast. Part legend.

Coach Beef could see that we were being defeated before the game had even begun, so he called us all together in one big huddle and gave the speech of all speeches.

“Listen up!” He pointed across the field with two fingers. “He may be Sean Sunday…but you’re going to go out there and be Sunday, Monday, Tuesday, Wednesday, Thursday, Friday and Saturday! Now get out there and win!”

So with a massive whoop, we took the field shouting, “We’re gonna’ be Sunday, Monday, Tuesday, Wednesday, Thursday, Friday and Saturday!” And then I thought, what? We’re going to win by being more days of the week than him? We’re going to die.

We kicked the ball and stopped the return on about the 22-yard line. Now came the hard part.

My position on defense was center linebacker, which basically means that my job was to stand several feet back from the line of scrimmage and try to stop any runs or passes in my zone from gaining yardage. I knew what I had to do. University Jr. High only had one play. They only needed one play. Hand the ball to Sean Sunday.

Sure enough, the quarterback barked the snap count and received the ball. With a smooth pivot to his right, he handed the ball to Sean Sunday. I went into action.

My strategy was clear. I had to take out his legs. If I could just knock him off balance, I could stop him.

I focused on his left quad and leapt into the air, arms thrust in front of me. I would wrap my arms around his leg and rip him down with my momentum. That was the plan, anyway.

Unfortunately, however, the moment my head struck Sean Sunday’s upper thigh, it felt like I had just flown into a telephone pole. My body pin-wheeled in midair and landed a few feet away. I rolled onto my back and sat up in time to see Sean Sunday lope down the field with defenders hanging on him, and I watched him make a touchdown.

Several plays later, they got the ball back and I found myself in the same situation. I talked quickly to my teammate next to me. We had to work together as a team. Maybe if we hit him from two sides that would do the trick. I told him I was going to hit Sean up top on his right side. I told my teammate to go for the legs on the left.

They hiked the ball. Sure enough, it was a hand off to number 44. I sped around the line to my left. My teammate shot through the line on the right. Our timing was perfect. I jumped. He jumped. This was going to work.

I slammed my shoulder pad into the side of Sean Sunday’s helmet and wrapped my arms around his massive neck. Out of the corner of my eye I saw my teammate spinning through the air and landing on the rough field. The momentum of my body slung my legs around his back. My right foot lodged above his right hip and my left foot found a foothold above his left hip. I was now riding piggyback on Sean Sunday!

There was nothing I could do. That day, we both made that touchdown.

I was so frustrated. In the third quarter I remember thinking, “What would the score be like if we had Sean Sunday on our team?” He was unstoppable.

The reality is that you do have a Sean Sunday on your team. But for some reason we are trying to go throughout our lives without his assistance. We tell him to sit on the sidelines and sip some Gatorade while we get the tar knocked out of us. We struggle and struggle every down, but in the back of our minds we think it’s okay, because at the last minute we’ll let the Big Guy play and He’ll settle the score. We’ll win in the end. It won’t be pretty, but we’ll win.

Many people have expressed to me their belief that God wants you to “Do your best and then he’ll take care of the rest.” But nothing could be further from the truth.

You only prove one thing to God by trying to impress him with your spiritual skill on the field of life—you need help. We were not created to go it alone. We are meant to go with God.

Jeremiah 33:2&3 says, “This is what the Lord says, he who made the earth, the Lord who formed it and established it—the Lord is his name:  ‘Call to me and I will answer you and tell you great and unsearchable things you do not know.’”

Please listen to this very clearly: You are not expected to prove anything to God on the field of life. If we’re expected to win the game on our own—if God’s role is to simply carry us around on his shoulder in a great post-game celebration—then we really have no need for him or his sacrifice. He would simply be that hard-to-please parent that we’re struggling to appease.

But, if you knew that God himself is right there beside you and your guardian angel is within your reach, you would truly comprehend that you are not alone in your quest to live with God. And you would never be afraid again.

So go on. Put God in your life’s game. Let the Big Guy Play!