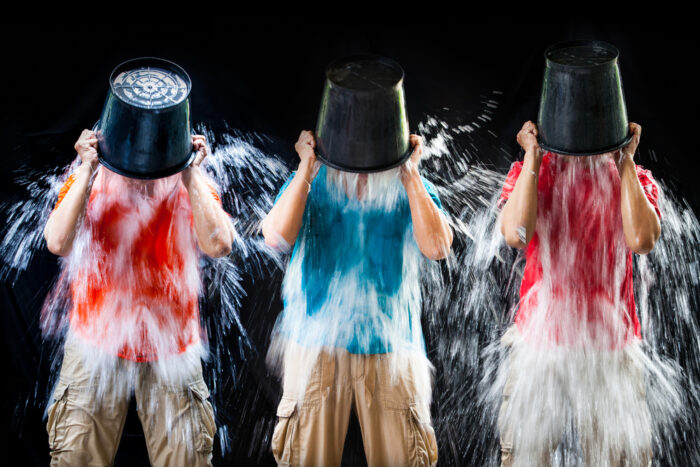 If Eddy would have vanished from the face of the earth, all of us would have promptly written to our Congressmen and requested that day be named a national holiday. We would have named it “Good Riddance Day.”

1 Corinthians 12 contains a long list of spiritual gifts, but Eddy’s gift was not one of them. He had the gift of annoyance. Like a bloodhound, he would sniff out your pet peeves and then proceed to bug you, and bug you, until you lost it.

One of his favorite hobbies was pulling pranks. All of us in the high school dorm were filled with nervous tension because we didn’t know who might be his next target.

So, it was no surprise that he pranked my roommate and me one day. During the night, Eddy propped a mop bucket full of water against our door. When we opened the door the next morning, the water came pouring in. My roommate and I had the habit of spreading our homework and textbooks across the floor every evening while we studied. So you can imagine our horror as we scooped up our wet papers and watched the ink drip down until the writing was nearly illegible. We fanned the pages of our books, but we knew that they were going to dry in a wavy mess anyway.

Without discussion, we looked at each other and shouted, “Eddy!”

We thought it was necessary to avenge ourselves. So we quickly hatched a plan. That day my roommate had to bring back a two-by-six plank, and I had to acquire two cinder blocks.

It is so difficult to remain silent while you’re getting even. But somehow, we managed to place the cinder blocks on either side of Eddy’s door and set the board on top of them without arousing him. Next, we emptied a 50-gallon rubber trashcan of its contents and propped it against the door with the bottom resting on the plank. Nervously we filled the trashcan with buckets of water until it was as full as possible. Then we went back to our room, giggling like little boys.

Early in the morning my roommate and I brought chairs and sat at the end of the hallway waiting for Eddy to drown. We didn’t have to wait long before we saw a long shadow stretch from under the door. Each door in the dorm had about two and a half inches of space at the bottom so that the dean could tell if your lights were on past curfew.

We heard Eddy drop to the floor and look through the space under the door. His shadow confirmed what we heard. He was checking to see if someone had placed a bucket in front of his door in retaliation. But that’s where the genius of our plan came in to play. Because the cinder blocks were far enough from the edge of his door, and because the trash can tsunami was resting atop a plank, it looked all clear from inside the room.

Seconds later we heard his doorknob turn and saw the trashcan push the door open with its weight. The water flooded his room. We heard a big crash and remembered that he had been building a “castle” out of hundreds of empty soda cans. A few cans literally floated out into the hallway.

Eddy sloshed out of his room. His face was red and twisted with anger. As he looked down the hall at us, we waved politely from our chairs and then walked back to our room wondering if he would ever try a prank on us again, and if so, would it ever end?

That’s the problem with personal justice. It never seems to balance out. No matter how hard we try to be fair and upright, it almost always seems like if you’re a good guy, you finish last—if you finish at all. You’ve turned the other cheek so many times that you’ve lost track of which one they’re supposed to hit next. So what do you do when you have tried to love your enemy, but they act unlovable?!

Let me remind you of Jonah and the Assyrians.  The Assyrians were definitely deserving of God’s wrath.  They were known for horrific acts.  One of their favorite ways to torture an enemy was to skin them. And now you can probably also understand why Jonah hated them so much. They were the most unlovable people alive. It is very likely that Jonah saw the remains of one of his family members or a close friend when he went there.

He wanted the Assyrians dead, not spared. He wanted them to pay for everything they had taken from him. But instead of giving Jonah a superpower to wipe them out like he did with Samson, God gave him a message of grace and forgiveness.

That’s why Jonah is so upset when the king and his kingdom repents and asks God for mercy. Jonah yells at God, “O LORD, is this not what I said when I was still at home? That is why I was so quick to flee to Tarshish. I knew that you are a gracious and compassionate God, slow to anger and abounding in love, a God who relents from sending calamity” (Jonah 4:2 NIV).

Jonah is angry that God is not. He’s dismayed that God would show mercy to such an awful group of people.

Jonah pouts under a shelter on a hillside east of the city. He sat there waiting to see what would happen. He remembered what happened to Sodom and Gomorrah and hoped that today he had the best seat in the house for the sequel.

But for some reason, God gives mercy instead of punishment. In fact, he prefers it. He says, “I want you to show love, not offer sacrifices. I want you to know me more than I want burnt offerings” (Hosea 6:6 NLT).

The MOST important thing to God is not the kind of person you are but the person you are kind to. What a great lesson for us all.  Today, we are called to love the ugly.  I’m ready, will you join me?