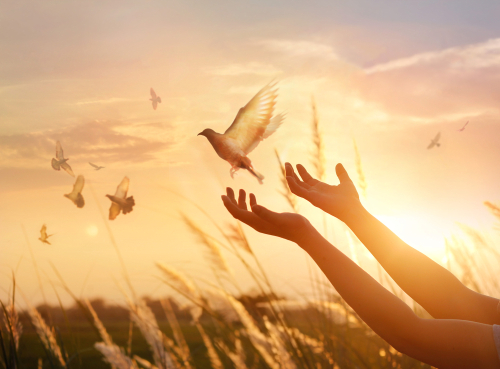 In 1969 Simon Wiesenthal penned his book, The Sunflower, which captured his experiences during the Holocaust.  In his book, Wiesenthal described how he had been taken from a Nazi death-camp to an army hospital.  He was taken by a nurse to the side of a Nazi soldier and was brought face to face with a fatally wounded man, bandaged from head to toe.  The soldier confessed the heinous act of setting ablaze an entire village of Jews; at his whim, men, women, and children were burned to death.  With great anxiety, he described his inability to silence from his mind the screams of those people.  Now on a deathbed himself, the man was making a last desperate attempt to seek the forgiveness of a Jew.  The man begged him to stay, repeating his cry for forgiveness, but Wiesenthal could only walk away.  At the hands of Nazi soldiers like this one now dying before him, Wiesenthal had lost eighty-nine of his own relatives.

Years later he wondered if he had done the right thing.  Should he have accepted the man’s repentance and offered the forgiveness so earnestly sought?  Seeking an answer, Wiesenthal wrote to thirty-two men and women of high regard–scholars, noble laureates, psychologists, and others.  Twenty-six of the thirty-two affirmed his choice to not offer the forgiveness that was sought.  Six speculated on the costly, but superior, road of pardon and mercy.

I don’t know if it is possible to offer forgiveness for something to which our primary connection is a shared race.  But I know that even in the darkest places the God of Scripture somehow carries the burden of grace.  Who can comprehend the Son of God on the Cross pleading with the Father to forgive the guilty for killing him?  The command to forgive is thoroughly unsettling; in fact, it is sometimes haunting.  To persist in love when we are rightfully angered by injustice is a massive and costly request.  And yet, this is what the cross demands of us.

“Lord, how many times shall I forgive my brother when he sins against me?  Up to seven times?” asked Peter.  But Jesus answered, “I tell you, not seven times, but seventy times seven” (Matthew 18:21-22).

God’s grace disrupts our sense of righteousness and summons us to respond in similar kind.  His unfathomable grace and mercy shatter our sense of who is worthy to enjoy the benefits of God’s kingdom.