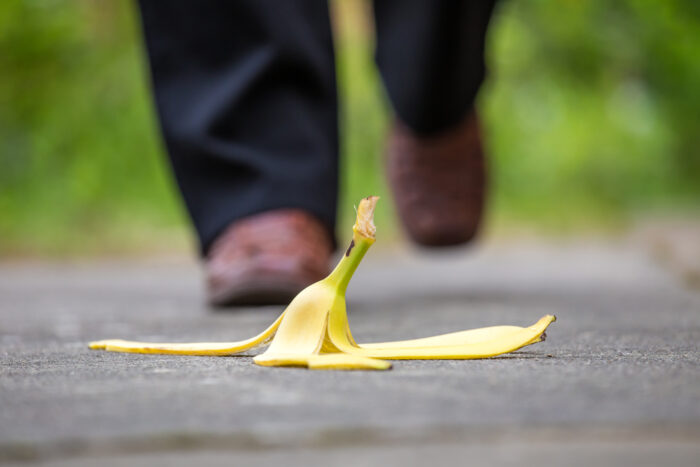 Bobby Leach achieved fame and fortune when, at the age of 53, he went over Niagara Falls in a barrel. After recuperating from his injuries, Bobby toured North America and the UK with the historic barrel in tow, recounting the experience for enthusiastic audiences in circus tents and lecture halls. Leach had been a lifelong circus performer, so daredevil stunts were nothing new to him. Even into his sixties he was attempting crazy things, such as swimming across whirlpool rapids.

So how did Bobby Leach die? He was the victim of a banana peel. No kidding. He slipped on a banana peel, injuring his leg. The leg became infected, leading to gangrene and requiring an amputation; but it was too late. He died within a couple of months.

Is it strange that the man who could survive Niagara Falls in a barrel couldn’t survive a banana peel? Not really. More often than not, it’s the little things that beat us. It’s because they catch us off guard. When you know you’re going over the falls in a barrel, you’re fully prepared and prayed up. With something as mundane as walking down the street – even a street littered with discarded fruit – you’re likely to think you’ve got it handled. That’s when you’re likely to slip. And that’s why Paul said… “So, if you think you are standing firm, be careful that you don’t fall! “ 1 Corinthians 10:12

I wonder how that banana peel got to Mr. Leach. Did he see it and think that the mere skin of a fruit couldn’t hurt him? Or was he simply not paying attention? Either way, the mistake proved fatal.

Think about the banana peels you encounter throughout the day: a missed devotional; a half-hearted effort at work; spending money without thinking. Perhaps it’s carelessness in conversation or neglecting the people who are most important to you. These things are more insidious than they appear. If you’re not careful, they can make you fall.

The flip side of the coin is that these little things also have the potential to take you to the next level. Jesus explained it:

“You have been faithful with a few things; I will put you in charge of many things.” Matthew 25:21

You will encounter many banana peels – or possible steppingstones – on life’s journey. Pay attention to each one, remembering that the “little” things may make a big difference for the future.