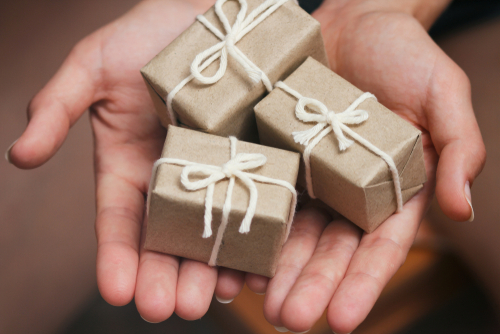 Jesus sat down near the place where the offerings were collected and watched the crowd putting their money into the temple treasury.  There were some who made a spectacle of their giving. A poor widow came and put in two very small copper coins, worth only a fraction of a penny.  The motives for giving were many that day, just as they are today.

When you examine giving in America: as much as a third of the 410 billion dollars Americans give away each year is collected in the month of December.  As big as that number seems, it’s surprising to note that charitable giving only comes from 63% of the population.

This shows that giving is not a collective national trait.  There is a Giving America and Non-Giving America, and what distinguishes them is not income.  In fact, in an article from the Wall Street Journal, it is reported “America’s working poor give away at least as large a percentage of their incomes as the rich, and a lot more than the middle class.  The charity gap is driven not by economics but by values.”  Giving is apparently a matter of perspective

As Jesus watched the people in the temple giving their offerings, he called his disciples to notice the gift given by the widow. “I tell you the truth, this poor widow has put more into the treasury than all the others.  They all gave out of their wealth; but she, out of her poverty, put in everything–all she had to live on.” (Mark 12:43-44)

What is it that motivates a woman to give when it is so rational to save? If we are merely products of time and chance, programmed for survival of the fittest, why would we give at all?  Arthur Brooks offers one more statistic: “Americans who weekly attend a house of worship are 25 percentage points more likely to give than people who go to church rarely or never.  These religious folks also give nearly four times more dollars per year than secularists, on average, and volunteer more than twice as frequently.”

When Jesus said that we would always have the poor with us, I don’t think he said it with the kind of despair I sometimes find within me when I look around and see how vast is the need of a hurting world. I think he said it as if it were a promise that He, too, would be near.  In the cup of cold water delivered to the least of these, in the reaching out to our neighbors, in the giving to others because God has given to us, He is there among us.  He is with the hand extended to the one hurting; He is behind the eyes of the one in need.  As we give to these, we give to Jesus, and we are reminded that everyone in need matters to Him.