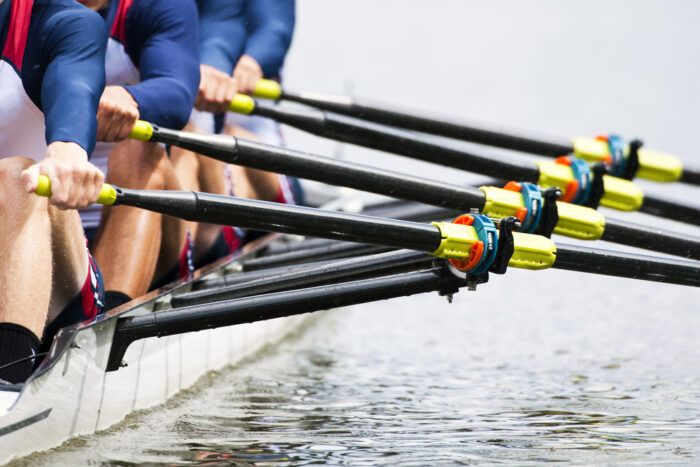 Mary Whipple is one of the most unbeatable athletes in the sport of rowing.  Between the years 2002 and 2012, Mary earned 7 Gold Medals—5 World Championships and 2 Olympic Gold medals. I had the distinct privilege of being one of her professors when she was in high school, so it gave me the opportunity to stay connected with her after her explosive success on the world stage. As a life coach at heart, I wanted to glean from her what she consistently did to get Gold Medal results. And I gleaned a lot from that conversation! But the one thing that I think is extremely applicable here is this.

She goes on to say, “There are no superstars on the women’s 8 rowing team. It takes all of them, making an agreement: I’m not going to let you down, and you’re not going to let me down.” They cannot win if someone else is pulling their weight. “If you’re not pulling your own weight, you’re passing that responsibility on to somebody else. It is such a special relationship when you can say, ‘We’re all in!’

God, in His great framework in creating everything on this planet did not set up a system of individuals. He made everything to work as a team. God created Adam and Eve to be partners. And you don’t need to be a doctor to know that productivity only happens when you are partnered with somebody. To be productive, the bees are partnered with the flowers, and the flowers provide nectar and the bees produce honey, and the flowers are pollinated and they produce fruit. Global companies are only able to go global once they’ve partnered with other companies, and they team up to produce more than they ever could alone.

Jesus, being the Creator who set up this system of productivity on this earth, wasted no time to teach us by example at the beginning of his ministry by selecting his partners—his team. The first thing he did was to choose His team: I want you…and I want you over there…and that one right there. He travelled all the way to another city and said, “I want you too.” He’s putting together a team for effective production.

If there is one thing that the enemy fights with the church using more than anything else, it is unity. Jesus is clear that a house that is divided against itself cannot stand. You need a team, a people that you can depend on.

So what do you think?  Can we all work as a team and put that paddle in the direction where God wants us to move, and repeat this until we see the fulfillment of God’s victory? If so, we’ll see the eternal streets of gold with our own eyes.