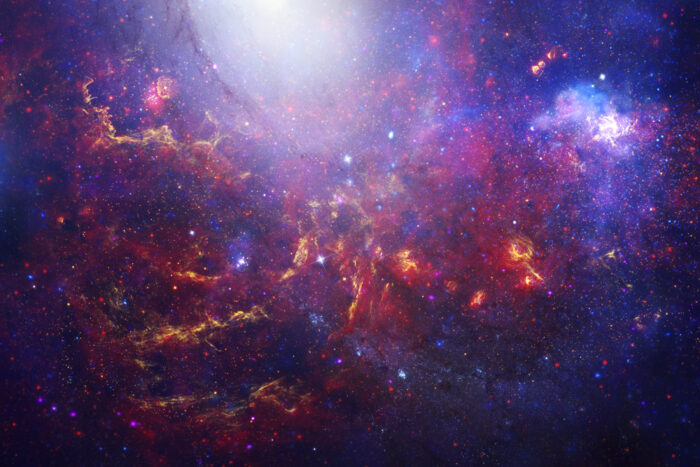 On January 15, 1996 astronomers wanted to test the ability of the new Hubble orbiting Deep Space Telescope.  So they found a portion of black space.  This is a spot in the sky in which no celestial objects had ever been found. The spot that they focused on was an area near the handle of the Big Dipper.  If you put a grain of sand on the top of your thumb and hold it up at arm’s length, that is the proportion of sky that they were looking at.  As the telescope zoomed in on this black dot of space, all of the astronomers were amazed at what it found.  In this unexplored grain of space, they could count over fifteen hundred other galaxies at a distance of approximately fifteen billion light years away. Just when we thought we were getting a handle on how much God had created, we had to throw away our previous estimates and begin calculating new ones.

Separated by millions and billions of light years, an estimated eight hundred billion galaxies combine to form networks of threadlike patterns filling God’s three-dimensional canvas.  Scientists calculate that hundreds of trillions of civilizations inhabit the universe, and somehow, all of them are under the watchful eye of our God.

William Beebe, the naturalist, used to tell a story about the former U.S. President, Teddy Roosevelt. At Sagamore Hill, after enjoying an evening of conversation, the two of them would go outside and search the skies for a certain spot of fuzzy starlight near the lower left-hand corner of the Great Square of Pegasus. Then Roosevelt would recite: “That is the Spiral Galaxy in Andromeda. It is as large as our Milky Way. It is one of a hundred million galaxies. It consists of one hundred billion suns, each larger than our sun.” Then Roosevelt would grin and say, “Now I think we are small enough! Let’s go back inside.”1

The amazing thing about this new perspective is that God would look down from heaven at all he created, that he would look at the infinitesimally small planet called Earth, and say, “I’ve got to go down there in person, arrive as the most vulnerable of all creatures, a baby, live a horrible, tortured life and endure an undeserved painful death. Otherwise all of the rest of my creation will not be the same.

Are you kidding me?  Who’d miss us if we were gone? How could we possibly be worth it? Isaiah 40:12 and 15 (NIV) says, “Who has measured the waters in the hollow of his hand, or with the breadth of his hand marked off the heavens? Who has held the dust of the earth in a basket, or weighed the mountains on the scales and the hills in a balance? Surely the nations are like a drop in a bucket; they are regarded as dust on the scales; he weighs the islands as though they were fine dust.”

Let’s take another look at the God who made all of this. Isaiah chapter six gives us a picture of what type of honor that the Son of God left in order to come pay our debt.

In the year that King Uzziah died, I saw the Lord seated on a throne, high and exalted, and the train of his robe filled the temple. Above him were seraphs, each with six wings: With two wings they covered their faces, with two they covered their feet, and with two they were flying. And they were calling to one another: “Holy, holy, holy is the LORD Almighty; the whole earth is full of his glory.” At the sound of their voices the doorposts and thresholds shook and the temple was filled with smoke (Is. 6:1-4 NIV).

This is one of the three major biblical pictures we have of God when he is in heaven.  He is so great and mighty and all-powerful.  He is worshiped constantly by hosts of angels and creatures. He is cared for and praised—and then there’s us, his humans. We do our best to fit him into our busy schedules, and we know he’ll understand when we don’t. Because of that, even our perspective of God during the church worship hour is stunted.

Do you have the idea in your head that Christ came down here that great Christmas morning because we are so big and important? The most amazing thing is that even though we are imperceptibly small, God does think you’re important, and He loves you personally!  And what’s even more exciting is the realization that your infinitely small size in comparison with the rest of his other creations, makes his love that much more infinitely great.  He could have very easily flicked us out of existence, but he didn’t!  Why not? No one would have missed us.  That’s what makes Christ’s love for us even greater.  It is what makes his incarnation even more special.  Why did he come down that dark and cold morning? It had to be love—a love that you and I can never fathom.

Looking through God’s eyes means remembering our place as creatures and his place as Creator. We will never fully understand it, but we will forever appreciate it.