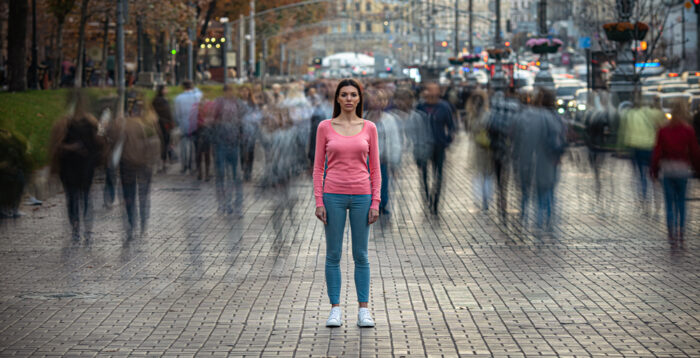 While I attended graduate school, I worked the nightshift for a security firm, mostly as the gateman for a yacht club, but frequently the security firm had me fill in at a factory that made die cast metal parts for Ford Mustangs. Throughout the sparsely-lit massive factory warehouses that held huge metal kilns full of molten metals, the machines hissed and gurgled liquid metal in the dark, and I had to remind myself as I walked my rounds all alone, that I was there to scare off the bad guys. But that didn’t seem to help me much. Late at night I would get scared, and I’d ask myself, “Why are you so afraid?” And I’d realize it was because I felt all alone.

When I began working as a pastor and began my first two years of preaching…I was a nervous wreck! My hands would shake, my voice would shake, and my eyes would have such bad tunnel vision that I could barely read my notes. And I’d ask myself, “Why are you so afraid?” And I’d realize it was because I felt all alone.

There was a time when Jesus’ disciples felt all alone as well. We can read about it in the book of Mark chapter 4, verses 35-41

That day when evening came, he said to his disciples, “Let us go over to the other side.” 36 Leaving the crowd behind, they took him along, just as he was, in the boat. There were also other boats with him. 37 A furious squall came up, and the waves broke over the boat, so that it was nearly swamped. 38 Jesus was in the stern, sleeping on a cushion. The disciples woke him and said to him, “Teacher, don’t you care if we drown?”

39 He got up, rebuked the wind and said to the waves, “Quiet! Be still!” Then the wind died down and it was completely calm.

40 He said to his disciples, “Why are you so afraid? Do you still have no faith?”

41 They were terrified and asked each other, “Who is this? Even the wind and the waves obey him!”

Perhaps you are in a storm today? Have you said one of these phrases lately? “I’m drowning in debt; My house is under water; I’m just trying to stay afloat; I’m just treading water; I can barely keep my head above water; I’ve got this sinking feeling; I’m all washed up.”

And now you’re crying out! Trying to scream over the storm, but Jesus doesn’t seem to hear you. You find him sleeping…and you’ve prayed, “Don’t you even care if we drown?” Of course He cares and already knows we will make it through the storm with Him at our side. Just as He commanded the storm that night, so He will today.  All you have to do is remember:  You. Are. Not. Alone.