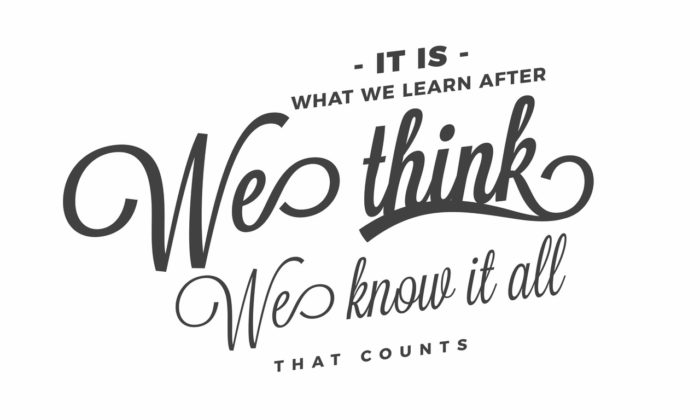 Some time ago, I posted something about God on Facebook. Within a few minutes a young pastor replied with a rather harsh rejection of my ideas. He was quite dismissive of my supposed wisdom and proceeded to tell me just how foolish and unbiblical I was for having made such a statement.

At first I was angry. I began to formulate a brilliant reply to my rude Facebook friend. The words were coming together with irrefutable logic and unparalleled clarity (grant me this delusion, please), and my heart raced as I imagined this young whippersnapper reading my reply with mouth agape when he realized the error of his ways!

Rather smugly I thought to myself, “How nice it must be to be so young and yet so certain about everything!” But then my thoughts were interrupted with a vague recollection of another young pastor many years ago who was equally self-assured and arrogant. Of course, I was that pastor. I was quite certain that I had the answers to life’s questions and was curious as to why no one seemed to be rushing to my door to listen to my great wisdom.

God dealt with me kindly, however. Instead of appointing someone to point out my folly, He simply put me in the position of ministering to people whose lives were very messy and whose problems were extremely complex. My pat answers didn’t seem to apply to their situation, so I went back to the Bible to study further. My study left me with more questions, so I read books by greatly respected theologians, psychologists, and philosophers. While I rejected some of their ideas, most of what they had written challenged my previously held concepts about who God is and how He deals with people.

As the years passed, I continued to minister to an ever-expanding variety of people with an equally expanding array of life’s difficult problems. I realized that I was collecting questions much faster than answers. This drove me to further study and to an even wider circle of authors of renown.

The decades have passed, and I now find myself much closer to the end of my ministry than to its beginning. I believe that my life experiences and study have given me a much greater knowledge of God than I possessed when I began my ministry. However, even with all of that expanded knowledge, I now believe that I know far less about God than I ever thought possible.

Today, I am thankful for my ignorance. I’m thankful that God is far too big to be contained in my theological or ethical boxes, far too complex to be comprehended, far too wise to be second-guessed, far too generous to be restricted, and far better than I’ve ever dared dream possible. He is simply beyond my limited capabilities. He is much bigger than I thought, and for that I am thankful.

Job came to a similar place in his life. After facing complex and challenging life situations, Job’s ideas about God were smashed, and new, broader ideas began to grow.

Then Job replied to the LORD:  “I know that you can do anything, and no one can stop you. You ask, ‘Who is this that questions my wisdom with such ignorance?’ It is I. And I was talking about things I did not understand, things far too wonderful for me….”

I never answered my young pastoral friend. I’m glad I didn’t. It’s one of the few times in life that I was actually wise enough to keep my mouth shut. God was gracious enough to lead me gently through each step along the path of maturity, and He has been too kind to chide me for having made so little progress along that narrow way. I owe it to my young friend to allow God to do the same thing for him. Perhaps he will cover more ground during his lifetime than I have in mine.

Certainty is no longer my constant companion. Now I remain joyously uncertain of everything except this: God is bigger, wiser, more powerful, and more loving than I can imagine. Of this I am certain!