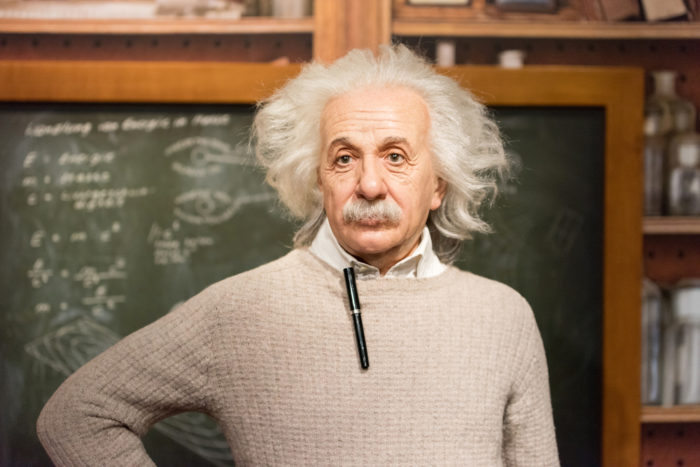 Scientists refer to the year 1905 as Albert Einstein’s “annus mirabilis”–his year of miracles. That year, he completed a whole series of important scientific papers, all within a few months of each other, the least of which included his theory of special relativity and the renowned equation E=mc².  In addition to these better-known contributions was also his most revolutionary contribution.  Einstein submitted a paper that directly challenged the orthodoxy of physics. The paper described his radical insight into the nature of light as a particle.

In 1905, all physicists explained light as a wave. It was a time-honored, unquestionable fact.  For over a century, scientists had grown in their certainty of this, citing experiments that made certain the wave nature of light, while overlooking some of its stranger behaviors. For example, when light strikes certain metals, an electron is lost in the process; but if light were only an electromagnetic wave, this would be impossible.  Einstein proposed that light was not only a wave, but consisted of localized particles.

Perhaps the most helpful aspect of his theory was the unassuming attitude with which he presented his far-reaching thoughts. “What I see in nature,” he once noted, “is a magnificent structure that we can comprehend only very imperfectly, and that must fill a thinking person with a feeling of humility.”

You and I comprehend the world around us similarly, seeing it as in a mirror faintly.  We are awed because it is beyond us and awed that we should discover anything at all.  The Apostle Paul echoed our thoughts when he wrote: “Oh, the depth of the riches of the wisdom and knowledge of God! How unsearchable his judgments, and his paths beyond tracing out!  Who has known the mind of the Lord?  Or who has been his counselor?” Romans 11:33-34

And to think, this God invites us to know Him personally and to learn directly from Him. How shall we respond to the invitation?  “This is what the LORD says, he who made the earth, the LORD who formed it and established it–the LORD is his name: ‘Call to me and I will answer you and tell you great and unsearchable things you do not know’.” Jeremiah 33:2-3

Einstein’s ideas about light so disturbed the scientific community that his particle theory of light was not accepted for two decades.  His theory was and remains a revolutionary concept.  It is incredible that we should know light enough to marvel at it. It is altogether unfathomable that God who first commanded light to shine out of darkness calls us by name and invites us to learn of His unsearchable things.